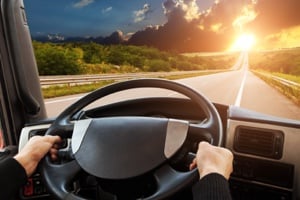 As a commercial vehicle driver, you probably travel on unfamiliar roads quite often, and when you’re unfamiliar with the roads, you’re more likely to get lost – an unclear turn, an unexpected accident, bad visibility.

When you get lost, it’s easy to get frustrated and impatient and make bad choices that can lead to accidents – especially when you’re on a tight schedule.

When you’re traveling on a familiar road, you know where that sharp turn is, where traffic tends to back up, and where that unexpected stop sign is located. When you’re on unfamiliar roads, you don’t have those advantages, which makes safe driving practices even more vital

In fact, the Large Truck Crash Causation Study found that nearly one-quarter of large-truck crashes occurred when CMV drivers were unfamiliar with the roadway.

1 - Plan Your Route Ahead of Time

Before you get behind the wheel, take a look at a map or your GPS and have your route planned. If you’re driving along and realize you got off track, pull off somewhere safe where you can refer to your map or guidance system to regain your bearings.

It may be tempting to adjust electronic devices while you’re driving. Don’t do it! Taking your eyes off the road for even a few seconds can result in an accident, and when you’re driving a 50,000-pound truck, the chances of that accident being severe enough to cause an injury are high.

If you’re transporting hazardous materials, you should also be aware of any route restrictions or designated routes required by state and local townships.

You’re in the passing lane of the interstate when you notice that you’re about to pass the exit you’re supposed to take. When you realize your mistake, you may be tempted to try to turn onto that exit quickly. Don’t do it! It isn’t worth the chance of causing injury to yourself or another driver.

According to the U.S. Department of Transportation Federal Motor Carrier Safety Administration NAFTA Safety Stats, almost 50,000 moving violations from 2004 to 2007 were classified as improper turns or improper lane changes.

If you miss a turn, get off at the next exit or go around the block instead of making a knee-jerk decision.

3 - Communicate With Other Drivers

Let other drivers know in advance what you intend to do – even if that’s just changing lanes – by using your turn signal. A recent study reported that there are approximately 630,000 lane-change crashes annually (involving both large trucks and passenger vehicles).

Here are other ways you can try to communicate with drivers around you:

When you’re driving on unfamiliar roads, it’s even more crucial that you exercise safe driving habits to keep yourself and those around you safe. Lower trucking insurance premiums that go with fewer accidents and claims is just icing on the cake.

Want to Save on Truck Insurance?

American Insuring Group can help you save even more on your trucking insurance. As independent agents, we’re free to shop the market for you among competing insurance carriers. So give us a call at (800) 947-1270 or (610) 775-3848 or connect with us online to start saving!