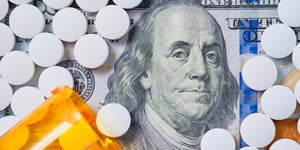 In the US, opioids are costing businesses an estimated $42 billion every year due to absenteeism, increased healthcare expenses, lost productivity, and increased Workers’ Compensation Insurance costs. Opioid addiction is the country’s biggest health crisis, and research shows that more than 50% of individuals who die from an opioid overdose had at least one job-related injury.

The result is that 15% of construction workers have a substance use disorder, while the national average is nearly half that at 8.6%, according to the National Safety Council.

What are the Risks of Opioids?

Here are a few risks with Prescription Opioid use, according to the National Association of Home Builders:

And it isn’t just the people addicted to opioids that are affected. The National Safety Council reports, “Substance use disorders affected 20.8 million Americans, almost 8% of the adult & adolescent population, when you include family members of those affected, nearly 1/3 of the US population is impacted by addiction. While 75% of these people are part of the workforce, most employers are unaware of the hidden costs associated with these problems.”

According to a Center for Construction Research and Training report released earlier this year, “65 unintentional overdose fatalities occurred on the job site in the construction industry in 2018 – a more than nine-fold increase from the seven recorded in 2011. The figure also represents a 35.4% climb from the 48 overdose deaths recorded in 2017.”

Save on Workers’ Compensation Insurance

The National Safety Council reports, “Companies and organizations of all sizes have an important role in promoting the health and safety of employees and managing risks in the workplace.” That includes opioid abuse. Create a safer workplace with a strong safety program that includes opioid education, and you create a workplace where employees thrive, and you enjoy lower Workers’ Compensation Insurance costs. 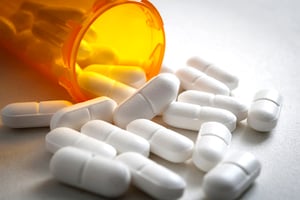 If you want to keep your Workers’ Comp insurance costs down, you need to understand the effects of opioid abuse.

The economic burden of prescription opioid misuse in the U.S. is about $78.5 billion every year including healthcare, lost productivity, treatment, and criminal justice costs, according to the Centers for Disease Control and Prevention. Health insurers and workers’ compensation carriers bear about one-third of that cost, according to Claims Journal.

Why is This Happening?

Often, when an employee is injured on the job, a physician will prescribe an opioid for the pain. The Addiction Center reported that in 2012, 259 million opioid painkiller prescriptions were written. According to the Talbot Campus, the US makes up just 5% of the world’s population but consumes about 80% of the world’s prescription opioid drugs.

The problem is that opiates are one of the most addictive substances available today. The Addiction Center reported that of the 259 million prescriptions written in 2012, an estimated 2 million led to addiction.

According to the Talbot Campus, prescription opioid drugs contribute to 40% of all US opioid overdose deaths. The National Institute on Drug Abuse reports that every day, more than 130 people in the US die after overdosing on opioids.

Furthermore, approximately 5% of those who abuse prescription drugs eventually transition to heroin.

The Link Between Prescription and Illicit Opioids

Opioids include pain relievers such as oxycodone, hydrocodone, codeine, morphine, etc. that are available by prescription. However, many opioid addicts turn to illegal drugs like heroin and synthetic opioids such as fentanyl.  The Talbot Campus reported that about three out of four heroin users misused prescription opioids before their use of heroin.

According to the CDC, there were more deaths involving synthetic opioids (more than 28,000) than from any other type of opioid in 2017. The introduction of fentanyl and other synthetic opioids is currently the most significant concern among opioid experts.

What can you do as an Employer?

Despite these frightening statistics, most people who are prescribed opioids do not become addicts; however, the ones who do are costing U.S. businesses like yours billions of dollars every year.

Thankfully, some precautions can be taken to address pain relief for injured employees. Here are a few steps to take if you want to reduce your workers’ compensation insurance costs.

Make sure they understand the risks of opioid use, how addictive it can be, and how to prevent problems.

Build a good relationship with area physicians - especially physicians within your network – and pharmacy benefit managers to make sure that they understand the risks of opioid use and how to minimize those risks such as screening patients for addiction, avoiding the use of opioids as the first line of therapy, and conducting urine screenings.

If you suspect a case of opioid over prescription or abuse, intervene by talking to another physician, the insurer, and/or the third-party administrator.

Accidents do happen, and employees do get hurt, but don’t allow the prevalence of opioid addiction exacerbate the effects of those injuries on the injured employee, his or her family and coworkers, or your workers’ comp costs.

Another way to save on workers’ compensation and other commercial insurance costs is to work with an independent agent who can compare the cost of your insurance with more than one company.

It’s difficult to pick up a newspaper these days and not see an article about the opioid epidemic plaguing Americans.

It is a serious issue that is costing businesses millions of dollars every year.

According to the Center for Disease Control (CDC), more than 700,000 people died from a drug overdose from 1999 to 2017, and about 68% of the deaths that occurred in 2017 involved an opioid. The number of deaths caused by opioid overdose – both prescription and illegal – was six times higher than in 1999.

Impact on the Construction Industry

The construction industry is not immune to this epidemic – in fact, it is hit harder than most. The very nature of the industry makes construction workers more vulnerable to opioid abuse than workers in other occupations. In 2016, 73% of injured construction workerswere prescribed a narcotic painkiller. According to the Substance Abuse and Mental Health Services Administration, construction workers suffer from substance use disorders at nearly twice the rate of the general population.

This creates higher workers compensation (WC) losses, and WC insurance costs for construction employees are more than double the average cost for other occupations, according to the Center for Construction Research and Training. Narcotics such as opioids account for 29 percent of prescription costs in workers compensation, according to the National Institute for Occupational Safety and Health(NIOSH).

Why is Opioid Addiction Hitting the Construction Industry so Hard?

If you think about it, it is not a surprise that employees in the construction industry have been hit hard by the opioid epidemic. Here’s why:

What Can You do as an Employer?

You can help minimize opioid addiction among your workers:

The human cost of this epidemic is astounding, but the financial loss to construction companies is also a concern. In an industry where workers’ compensation costs are already higher than average, adding in the problems associated with opioid addiction can put a real strain on your bottom line.

We specialize in construction and contractor insurance and are aware of the unique challenges you face, including the cost of workers compensation insurance. We'll help you save a bundle while obtaining the quality coverage you need to be well protected!